Mark Ames has brilliantly tracked down the Kremlin troll story and shown that it is the same story over and over again, word for word, time after time. He has traced it as far back as 2013 and, in his search, he kept tripping over RFE/RL which proudly states that it “provide[s] what many people cannot get locally: uncensored news, responsible discussion, and open debate.” Or, alternatively, given the fact that it is fully funded by the US government, all the news that Washington wants you to hear. So, not, perhaps, a source that can be fully trusted on this particular subject.

But never mind that, let’s pretend that it is telling us the truth. An entire building in St Petersburg is filled with well-paid Putin trolls labouring away on the Internet. But let us apply a little reasoning (hah hah – what’s reason got to do with it?) to the matter. We here at RI attract a few trolls. We may divide them into two groups. One is the sort of person whose comments are all variations on “Putin sucks and you do too”. These trolls, of course, have a mirror image: “You suck and Putin’s great”. For the sake of discussion we will call this the “monotroll”: he has only one thing to say which is “You’re an idiot” and he says it over and over again.

A slightly (but only very slightly) more interesting troll is what we will call the “cliché repeater”. This one would say things like “Putin sucks because the Russian economy is in the toilet/the population is shrinking/the Ruble is collapsing/Russia is weak” or so forth. Much the same really, as the monotroll except that he understands that some pretence of an argument is necessary.

In Graham’s useful hierarchy of disagreement the monotroll is operating at the lowest levels of Name-calling and Ad Hominem; the cliché repeater has at least got to Contradiction. But the essential point is that neither of these is going to change anybody’s mind. 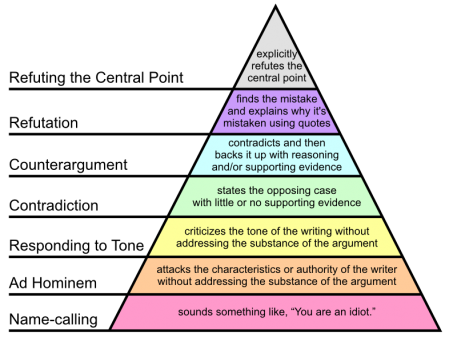 You can, in other words, have a million people typing into every Internet forum “You’re an idiot” over and over again and they will make no difference at all. But think further: the cliché repeater will have no effect on a forum such as RI. The reason for his failure is very simple: many/most of the people reading RI know that the clichés are false: Russia’s economy is not collapsing, its demographic picture is comparatively healthy and so on. Those who do not yet know that the clichés are false have come to RI because they are starting to doubt the Party Line on Russia. A million trolls regurgitating clichés will have no effect on either.

And the reverse is true: the fabled Putin troll army typing “USA sucks”, “Ukraine sucks”, “Americans are couch potatoes and they’ll lose against the mighty Russians” or “you’re wrong because more people are in jail in the USA than anywhere else” will have zero effect on a neocon discussion group.

So who are these trolls persuading? No one.

So let’s move up Graham’s hierarchy, shall we? Here we find Counter Argument, Refutation, Refuting the Central Point. In short: you say this; I say that: here is my evidence, here is my argument. So, rather than “Putin sucks”, here is what Putin said (with reference to the actual speech, please, not the NYT/BBC/WaPo’s carefully-chosen selections), here is why he is wrong (argument, facts, discussion, examples). You may or may not agree, but there is something to get your teeth into: a logical fallacy, a misstatement. Or maybe not: maybe you will be convinced that you got it wrong. Or missed something. That, as Graham would agree, is how to argue.

No endless variations on “you suck”, no “cliché, cliché. Nya nya nya”. Instead, actual engagement, person to person, of what you said. Respectful, convincing, detailed, factual, logical.

Another variant: the people typing, from an index card pasted to their computer screens, Grahamian Counter Arguments, Refutations, Refuting the Central Points.

Well, the second variant isn’t trolling is it? No matter how many times it’s typed at you the Argument remains. The Argument is the thing that has to be answered. Not the frequency, the Argument itself.

In short, ladies and gentlemen, the Putin-Troll-Army story is nonsense. Real trollery is an irritation and no more. Actual argument has to be answered on its own merits. And the Western troll armies – sorry, fighting lies with truth – would, if they ever get off the ground, be equally pointless.

The Western fantasy of a mighty Putin Troll army ruining A Noble Effort to Spread Truth and Democratically Valid Explanations is yet more evidence that the Party Line knows it is losing its audience. Whingeing on about Putin’s troll army and closing comments sections is the equivalent of a temper tantrum, hands over ears, screaming “I can’t hear you!”.

Lies work for a while – quite a long time – but, eventually, reality bites. On its own. It wasn’t a building-full of people in St Petersburg typing “Putin ist ein Genie, Du bist ein Idiot” over and over again that made the German leadership see General Breedlove’s statements as “dangerous propaganda” any more than “Putin’s a genius and you are an idiot” made the editors at The Guardian feel their heads explode.