A number of people have challenged my (and the official Kremlin translators’) choice of “a major” for “krupneyshey” in Putin’s famous sentence “Above all, we should acknowledge that the collapse of the Soviet Union was a major geopolitical disaster of the century.” I stand by what I said: he did not say that there was no worse geopolitical disaster in the century. Neither did he mean that he wanted the empire back.

1. Meaning of the word “krupneyshey”. I take my authority from Pekhlivanova and Lebedeva: “Russian Grammar in Illustrations”; Moscow 1994; p 161. Here it is stated “To say that an object possesses some quality in extraordinary degree, without comparing it to other objects, the Russian uses a special adjectival form ending in -eyshiy (or -ayshiy, after zh, ch, sh, shch). A footnote tells us “These forms are used more frequently in bookish speech”.

To express the meaning “the object possesses the quality in the highest degree as compared to other objects” the modifier samyy is used.

A photograph of that page of the book is below 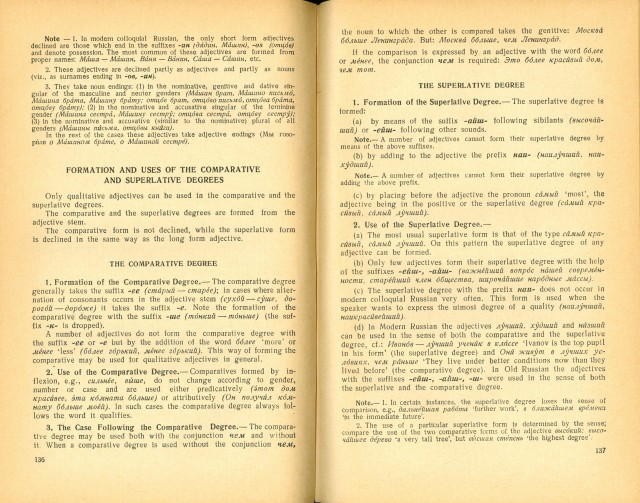 English does not have such an adjectival form: it has the quality (big) the comparative (bigger) the superlative (biggest). I would therefore suggest that the really correct translation would have been “one of the bigger” or even “one of the biggest”. But, according to my source, it would be absolutely wrong to call it the “biggest/largest/maximal” (which means number one, none bigger).

2. There is the argument from common sense: no Russian would ever say that any “geopolitical disaster” was bigger than the Second World War. His tongue couldn’t even form the syllables.

3. One must assume that Putin chooses his words carefully and knows what they mean especially in a formal speech like his address to the Federal Assembly in 2005 from which the sentence is taken.

4. One must assume that the Kremlin English translators know what they are doing. They chose the word “a major” for “krupneyshey”. By the way, I read the speech when it was given and downloaded the text in Russian and English at the time. There has been no change since. (It occurs to me, given that, in Latin, “maior” is the comparative of “magnus” – big, or great – the translators by that word choice might have been trying to suggest some quality that was on the high side of the scale without being “maximus”; in short “krupneyshey”; not just big but bigger than most? The comparative meaning of “major” seems to be hard-wired: can you even say “more major” or “most major” in English without sounding illiterate?)

5. The context makes it quite clear that Putin is not talking about loss of empire or anything like that. Here is the text around the famous sentence:

I consider the development of Russia as a free and democratic state to be our main political and ideological goal. We use these words fairly frequently, but rarely care to reveal how the deeper meaning of such values as freedom and democracy, justice and legality is translated into life.

Meanwhile, there is a need for such an analysis. The objectively difficult processes going on in Russia are increasingly becoming the subject of heated ideological discussions. And they are all connected with talk about freedom and democracy. Sometimes you can hear that since the Russian people have been silent for centuries, they are not used to or do not need freedom. And for that reason, it is claimed our citizens need constant supervision.

I would like to bring those who think this way back to reality, to the facts. To do so, I will recall once more Russia’s most recent history.

Above all, we should acknowledge that the collapse of the Soviet Union was a major geopolitical disaster of the century. As for the Russian nation, it became a genuine drama. Tens of millions of our co-citizens and compatriots found themselves outside Russian territory. Moreover, the epidemic of disintegration infected Russia itself.

Individual savings were depreciated, and old ideals destroyed. Many institutions were disbanded or reformed carelessly. Terrorist intervention and the Khasavyurt capitulation that followed damaged the country’s integrity. Oligarchic groups – possessing absolute control over information channels – served exclusively their own corporate interests. Mass poverty began to be seen as the norm. And all this was happening against the backdrop of a dramatic economic downturn, unstable finances, and the paralysis of the social sphere.

Many thought or seemed to think at the time that our young democracy was not a continuation of Russian statehood, but its ultimate collapse, the prolonged agony of the Soviet system.

But they were mistaken.

That was precisely the period when the significant developments took place in Russia. Our society was generating not only the energy of self-preservation, but also the will for a new and free life. In those difficult years, the people of Russia had to both uphold their state sovereignty and make an unerring choice in selecting a new vector of development in the thousand years of their history. They had to accomplish the most difficult task: how to safeguard their own values, not to squander undeniable achievements, and confirm the viability of Russian democracy. We had to find our own path in order to build a democratic, free and just society and state.

When speaking of justice, I am not of course referring to the notorious “take away and divide by all” formula, but extensive and equal opportunities for everybody to develop. Success for everyone. A better life for all.

In the ultimate analysis, by affirming these principles, we should become a free society of free people. But in this context it would be appropriate to remember how Russian society formed an aspiration for freedom and justice, how this aspiration matured in the public mind.

Above all else Russia was, is and will, of course, be a major European power. Achieved through much suffering by European culture, the ideals of freedom, human rights, justice and democracy have for many centuries been our society’s determining values.

It is bordering on dishonesty, to take that one sentence out of that context and use it as the capstone of an accusation that Putin wants to get the USSR back. It obvious that he is saying the Russian people are not doomed to become slaves or failures, they have come through this disaster and will grow again; freedom and democracy are possible for them. Ex tenebris lux.

Speaking of freedom and democracy, if one must quote Putin, why not this one? “History proves all dictatorships, all authoritarian forms of government are transient. Only democratic systems are intransient.” (“Russia at the turn of the millennium” 1999). Interesting point, isn’t it? Democracies will outlive dictatorships, no matter how tough the former appear at the beginning.

What’s he mean by “democracy”? “Authoritarianism is complete disregard for the law. Democracy is the observance of the law.” (Interview with reporters, 24 Dec 2000). Depends on the laws, of course, but not a silly or trivial statement, is it?

Or, if we want his opinion on the USSR, how about this one? “In the Soviet Union, for many decades, we lived under the motto, we need to think about the future generation. But we never thought about the existing, current, present generations. And at the end of the day, we have destroyed the country, not thinking about the people living today.” (Putin, press conference in Washington, 16 Sept 2005, White House website). The failure of the USSR was built-in from the start.

I could go on – I have a file of quotations collected over the years – Putin has said a lot about a lot of things. Almost all of it carefully considered and embedded in a deep and broad context. But I’ll stop at one more:

“Our goals are very clear. We want high living standards and a safe, free and comfortable life. We want a mature democracy and a developed civil society. We want to strengthen Russia’s place in the world. But our main goal, I repeat, is to bring about a noticeable rise in our people’s prosperity.” (Address to the Federal Assembly, 26 May 2004”.